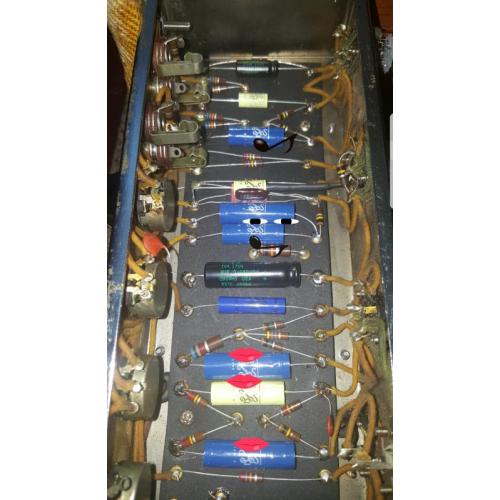 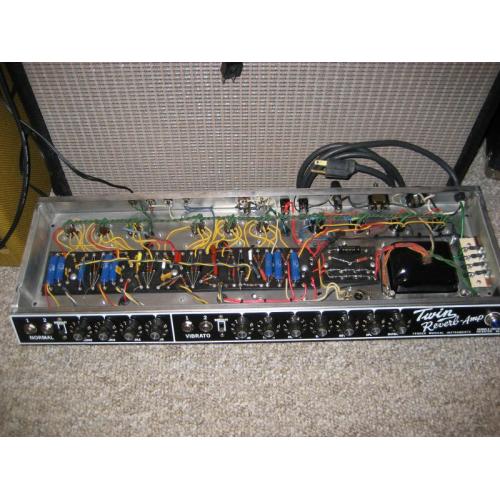 The BlueMolded line of polyester film capacitors are retrofits for Astron or Blue Molded caps used in vintage tweed, brown, and blackface Fenders®. These capacitors amazingly capture vintage Fender® tones of the Blackface era, and the famous 1959 tweed 5F6-A Bassman era which is so musical and good, Marshall™ modeled their amps after them!

After years of painstaking research and development, in 2003 SoZo Amplification began manufacturing the SoZo Mustard Cap™ capacitors, which quickly caught on among discriminating musicians and amp designers. Now, hundreds of thousands of capacitors later, SoZo has engineered capacitor product lines optimized for different products, including amps by Marshall™, Fender®, Vox®, HiWatt, and others, as well as professional sound gear from Neve, API, Neumann, Universal Audio, Urei, and virtually any quality gear from the 1950s on.

These caps are successful recreations of the originals and are superbly built and excellent-sounding caps. When one considers the audio signal passes through as many as ten capacitors before exiting the amplifier, you can see how these components play an extremely large role in the tone of the amplifier.

Click each question to see its answers.
1 answers Is the line marking the foil end on the sozo blue caps?
Asked by Anonymous on November 8th, 2018.
BradWbr

Staff Member
Yes, that is the significance of the silver line.
Answer this question
1 answers Will this replace the blue molded Packard-Bell .022 mfd 600 volt foil caps?
Asked by Anonymous on November 22nd, 2018.
BradWbr

Staff Member
The voltage is lower, but if your application can safely run 500V caps, yes, these can be acceptable replacements.
Answer this question
1 answers I have some sozo caps I bought from you a while ago. Was going thru them today. Can't seem to figure out what the uf rating is. It says 223k on them . I have others that say 473k and 103k. Can someone please inform me how to tell what microfarads they are. Thank you.
Asked by Anonymous on March 19th, 2021.
BradWbr

Staff Member
The Sozo caps use the same format as the Orange Drops, and we have a tech article on how to decode their labeling system: https://www.tubesandmore.com/tech-articles/orange-drop-capacitor-form
Answer this question
Have a question of your own? Ask us now!
Terms and Conditions
Add a review

Turned my 5E3 into a sweet tone machine.
I pulled the orange drops and replaced them with the Sozo caps.
Wow !
Awesome product.

Fantastic capacitors. I've always liked Sozo. I bought a set of these for my 1969 Deluxe Reverb which had those raggedy sounding "brick drop" caps in it. Sound just floats now as it should. The blue Ajax caps back in the day are my favorite of all time. Thankfully with the Sozo blues I don't need to seek out a set of those old Ajax caps.

I was a little bit leery of using these designer caps due to cost, and I truly think the whole "classic tone" BS when it comes to caps is complete nonsense, but..........The amps I've designed and built using them sure do sound sweet. The quality is outstanding with the only drawback (besides cost) being their physical size. I'm a long time builder and player, and I trust my ears. They're happy!

Sozo has learned a few lessons by having a spec OEM winder up the prices on him, without ever sharing the winding specs, so Sozo was left to pick up the pieces, find a new winder and redesign a capacitor in both the blue and yellow flavors. I don't know what a super expensive capacitor tester is, because I use a $7000 LCR, with $1500 leads, $9000 in power supplies, a load, O Scopes, Lisajous audio scopes, audio analyzers, function gens, a millivolt meter and a micro-volt, and even a nano-volt meter. We also jig these caps up and run a clean sine wave through them, to check for noise, microphonics & shielding from EMI & RFI. The LCR runs at around 45 test different points between 10Hz and 20,000 Hz, measuring dissipation, ESR, Q, B, Z, and of course the capacitance, at each preset frequency. The dissipation and Q Z/ESR generally tells us whether or not the caps leak, but for fun, we run them up to their working voltage with a +/- DC millivolt meter and check the time it takes for the meter to settle on ZERO! A bad leaky will NEVER zero out. IT LEAKS DC, SO IT NEEDS TO GO AWAY! A cap that is going bad will have a long lag time when the DC voltage changes, up or down. This makes your tone muddy! The micro-volt meter is also run in concert with a nanovolt Oscilloscope to check AC ripple. These are ALL DC voltages. These just tell me, is the cap going to fail. Sozos won't fail so long as the working voltages are not exceeded. Now we come to the truth test. This is the LCR running at 1 volt, at frequencies from 10 Hz to 30 KHz. The Q, D, ESR, Z, C will ALL change with the frequency being fed through the capacitor. Sozos tend to hold a better Q at lower frequencies than their Mullard and Ajax vintage counterparts. From about 150-300 Hz, on up, they Sozo caps follow the same curves as the vintage caps, very nicely. THE ONLY DEFICIENCY WITH SOZO IS IN SHIELDING FROM EMI, RFI and AC HUM, WHICH IS A FORM OF EMI! Mullard Philips Bianchi mustard caps shield a little better. It's the way they were made back then. Sozos will have a tighter in slightly more your face bottom end than the vintage caps. I cannot honestly say that Mullard caps did not test better 30 years ago, when they were brand new, but Sozo did a super great job making their caps follow the Q curves of their vintage counterparts, and the Sozos are encased better than the Ajax caps ever were. This means the Sozos should drift less when they age. The Mullards, might be a tad better, but I cannot justify the high prices for OLD capacitors. There is no way in blue blazes I will put NOS yellow Philips Mullard film caps in a custom build without a disclaimer, for reliability. Sozo has the edge over NOS every time. The LCR is an ESI Teague 2600 series, video display meter, with an old magnetic tape memory, and tests at frequencies between 10 Hz and 100KHz, with an external bias voltage capability of 50 volts which will be modulated as a sine wave from 10Hz to 100KHz! The machine can record batch results in the 1000s. The DC PSUs are made by Lambda, Fluke, Gates, Yokoshima, and Sorensen, and they are all regulated vacuum tube high voltage supplies. The micro/nano volt meter, is made by the famous Keithly. The O Scope is a Tektronix nano volt vertical range scope, which can tell me ripple bypass, and even microphonic noise, whether it is piezo, or tribo electrically produced. The swing meter is an old Welch Allyn meter, which mostly tells me, how tired my filter caps are! It will also tell me if any Sozo, Ajax, or other cap is leaking as little as 1/2 millivolt. SO AFTER HOOKING SOZOS UP TO over $20,000 in test gear, I still need to use my most valuable testers.........the two horizontal brain vents, on either side of my head, affectionately known as "MY EARS"! My ears really love Sozo caps! BLUE or YELLOW! Even the dog's ears love Sozo caps, and you should see her ears! They are huge, and pointy! She can hear a lizard fart from 6 miles away, and pinpoint its location. So my fart smeller dog even agrees, the guy at Sozo is a pretty smart feller too. He did a good job making these caps track on test equipment very much like the vintage caps, and they kinda sound a little better too, especially in the bass & low mids. These caps are truly epic, but not ridiculously expensive. FMIC is selling some PIO caps for $18-$30 each, and they can keep them. Oddly enough, the Japanese copied the 1960 Gibson Sprague black beauty film caps to near perfection, back in the 1970s. I have a small stash of the .022s. Ibanez was famous for using them. 50 volt caps don't work in tube amps, so stick with the Sozos.

Excellent caps.This is the first time i've used SoZo blue molded film caps in an amp build and Im very impressed. These are made solid and test very consisently. They sound great in my 6G3 clone. I could mention another make of boutique amplifier film cap, whio charge and arm and a leg for caps that look like they were made on a cigarrette rolling machine. I switching to all Sozo i think, except for the occasional master-volume Marshall build that requires the grainy Mallory 150'S

Blue Molded Review 2nd paragraph.
I'm only concerned with fat tone.... with a non harsh smooth top end while keeping mids bitey n grindy as well as a punchy and tight bass thump for amplified harmonica. I first used the yellow sozos in 04' replacing Red Paper Astrons--course it was a 1962 Harmony 305A, and the fatness roared through after breaking in a touch...killer! Big fat n airy. I now put them in everything.

In 07' I then built-For Myself- a SE Sharp Cutoff Pentode amp running a 6V6 completely tailored to the component specs I've learned over the years and I spared no expense. In this build i used all Yellow Sozos for tone, but when I decided to double the output coupling cap for even more low end I just put a Blue Molded in parallel and grabbed my hottest mic, (i build custom harp mics too) a 1940's Brush Crystal in a JT 30 Shell and ohhhhhh babyyyyyy! The low end is not muddy but rather even fatter with the same bite. Even before i doubled the coupling caps uF my pro harp playing buddies all say this is by far the fattest growlin'ist SE 6V6 with a 10" speaker they've ever heard. If you know the mighty HarpKing Amps built by probably the greatest amp tech and designer ever, John Kinder, well this has been nicknamed Little HarpKing. A big part is Sozo Caps. I will use nothing else for tone.
Some people think Paper N Oil Caps are the best. Sure they sound great, but if you use nothing but oil caps you tend to lose the BITE and amp once had. I personally know a very well known custom harp amp builder who uses all oil and his amps and sometimes the amps sound anemically warm....lack of bite.
Im getting ready to completely rebuild a 60watt Tube Pignose and Sozo Caps are going in it ?